skip to main | skip to sidebar

Most Painful 20 Torture Devices in the History...

Do you know what would have been the worst aspect of life during the European middle ages? Heinous personal hygiene? No. Disease and famine? Hardly. That really crappy mandolin music that midgets enjoy dancing to? Close, but wrong again. The worst thing about medieval life was the unwavering evil of the Christian "justice" system and the tools of torture they employed.

The following are the 20 worst torture devices of all time in the European History... 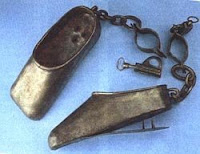 The shoes were often used in conjunction with the standing pillory (a device that holds your head and wrists in place while you stand). How long do you think you could stand on your tippy-toes before you had to rest your heels on those iron spikes?

The four sharp points snugly nestled under the chin and sternum were designed to allow the victim just enough range of motion with his mouth to murmer a confession.

Used primarily on women (as was the case for most devices of pseudo-sexual torture), the dunking stool would dip its occupant into a river for as long as the authorities saw fit.

The victim's legs were placed between two planks of wood and bound together with cords. Between the cords the torturers placed wedges with which they would violently hammer. Each time a wedge was hammered, an acute portion of the shin bone was shattered. The tormentors could hammer at least a dozen wedges up and down the legs. When the Boots were removed, the bone fragments fell to pieces and the skin of the lower legs merely served as loose sacks for them. 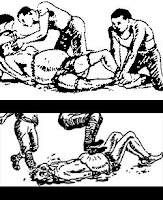 This is the only non-medieval, European torture on our list. The water torture was a favorite among Japanese POW guards during WWII. The victim was first bound with barbed wire and his mouth stuffed with rags. Next, the guards would snake a tube down the victim's nasal passage and bloat his belly with water. Once that was finished, the guards would kick and beat the poor sap's midsection until his stomach lining burst and and death ensued.

This was simply used to slowly tear the flesh from its victim, often times all the way down to the bone.

It does exactly what it looks like it does: the rack pulls your body from end to end until your limbs are slowly plucked from their joints.

Quartering is the rack taken to the next level and was reserved only for murderers and those who killed or attempted to take the life of a nobleman or royalty. Each of the prisoner's limbs were tied to a horse and the horses were whipped simultaneously so that each limb would erupt from the body in an instant. A crowd favorite. 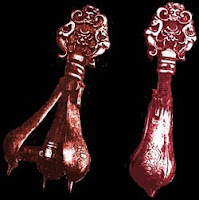 Hinging on your gender, the pear was either placed in your anus or your vagina in its thin form and then cranked to open up and blossom into a rather uncomfortable position 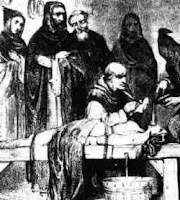 In many Catholic countries, the clergy believed that the corrupted soul of a damned person could be cleansed if they were forced to consume boiling water, burning coals, or both. Of course, this was what happened to prisoners before they were punished for their crime -- sort of a "warm-up" torture, if you will.

The pictured victim is one of the lucky ones because most occupants were caged completely naked to expose them to either extreme cold or hot weather conditions. And... most caged prisoners were usually placed in there only after other means of extreme physical torture were administered. But wait -- there's more! The victims were left in the cage until they died from either the elements or thirst, which could take weeks. 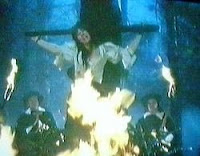 A favorite execution for those accused of witchcaft. Clergy believed that the burning of a witch permanently removed her evil spirits from the physical world, thus eliminating the possibility of any further contamination of innocent souls. Makes sense.

The victim was hoisted above the pyramid and slowly lowered, crotch first, onto its sharpened pinnacle. Hinging on the torturers mood, he could vary the amount of the victim's body weight applied to the point. 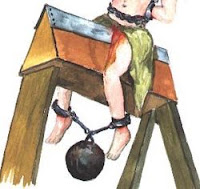 The Cradle is the nastier second cousin to the Judas Cradle. We believe the picture does all the explaining for us. 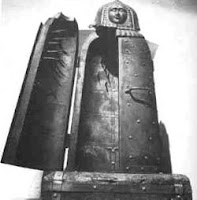 The following is a depiction of the first recorded use of the Iron Maiden on August 14, 1515 : "A forger of coins was placed inside, and the doors shut slowly, so that the very sharp points penetrated his arms and legs in several places, and his belly and chest, and his bladder and the root of his member, and his eyes, and his shoulders, and his buttocks, but not enough to kill him; and so, he remained making great cry and lament for two days, after which he died." 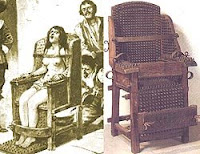 Not only were the hundreds of tiny spikes uncomfortable to sit on, but a fire was usually kindled under the iron chair to make it reach a horrible scalding point.

This was the standard form of punishment for traitors in Algiers, Tunis, Tripoli and Salee during the Middle Ages. Believe it or not, once the lengthy spike entered the victim's posterior and exited their mouth or throat, the victim might live for more than a day in this state and was left to crawl in the dirt for all to watch.

The saw may represent human ingenuity's darkest hour. The idea here is that when the victim is suspended upside down, most of the blood will go to the head. That is an important part of the process, you see, because as the torturers saw into the victim's crotch, all of the blood in the head will oxygenate the brain so that the victim will not pass out as one normally would under such excruciating pain. Typically, the saw would reach the victim's navel before unconsciousness would take hold -- sometimes as far as the midriff.

(1.) Breaking with the Wheel 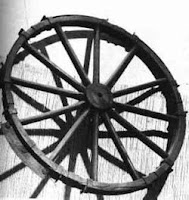 Okay, we've saved the most treacherous display for last. So, if you've had trouble with any of the above and want to turn back now, no one will think less of you for it................ You still here? You sick bastard. Okay, here we go... In terms of frequency used, the wheel was second only to hanging as the most common form of execution in Germany during the Middle Ages. First, the victim (usually naked) had each of his limbs spread apart and tied to the ground. However, wooden crosspieces were placed under each major joint such as the wrists, ankles, knees, hips and shoulders. The torturer would then smash each limb and joint with the heavy, iron-enhanced wheel. But that was just the beginning of the nightmare. Once the limbs were reduced to gelatinous appendages of mashed bones, blood and flesh, each arm and leg was braided into the spokes of the wheel and then hoisted upright for display. The agonizing victim would remain in this position for days as crows and insects feasted on him or her until death.
Posted by Dhammika at 11:51 AM

that is very scary stuff, it makes me angry in wat the eanings of this were, how bad judgment was also. i would certainly not have liked to have this done to me, but the pain would be excrucating to see that happen to a family member, or a friend, even someone you know, but anyone really.

Amazing how ingenious mankind can be when it comes to harming fellow humans.

sick minded people in cluding the one above

sick minded people including the person above

sick minded people including the person above